How clientelism, citizenship, and power shape personhood in Bosnia and Herzegovina

Why do people turn to personal connections to get things done?

Exploring the role of favors in social welfare systems in postwar, postsocialist Bosnia and Herzegovina, this volume provides a new theoretical angle on links between ambiguity and power. It demonstrates that favors were not an instrumental tactic of survival, nor a way to reproduce oneself as a moral person. Instead, favors enabled the insertion of personal compassion into the heart of the organization of welfare.

Managing Ambiguity follows how neoliberal insistence on local community, flexibility, and self-responsibility was translated into clientelist modes of relating and back, and how this fostered a specific mode of power.

EASA members can get 25% discount when purchasing this title directly from the publisher.

“While neoliberal capitalism may revolve around the fantasy of the rational and empowered individual, Brković shows that negotiating it in practice depends on quite the opposite: the strength and breadth of individuals’ social ties.” • Slavic Review

“[This book] takes a substantial step towards understanding the impact of social protection policies inherited from the socialist regimes of Eastern European countries integrated into the European Union… [and] is a remarkable anthropological contribution to the understanding of how national contexts are affected by neoliberal measures imposed by the European Union.” • Social Anthropology/Anthropologie Sociale

“While the majority of us have been using, citing, probing, and ‘massaging’ numerous concepts employed by Brković, her book does something ‘magical’ – it rearranges and reconnects peoples and objects; politics, bodies, and souls; ideas, discourses and practices (…) all the familiar pieces are there, but they are reassembled in a way that reveals different connections and relationships, which not only inform us about contemporary Bosnia but also say something significant about our world.” • Journal of Anthropological Research

“In combination with the high theoretical aspirations with which the book concludes, the result is to make this book salutary reading for anthropologists.” • American Anthropologist

“Beyond academia, the book’s general framework encompassing health and social care will be of interest to a broader public concerned with the states emerging from former Yugoslavia….Ultimately, Managing Ambiguity is an intellectually stimulating ethnographic read, allowing for outsiders to access social phenomena unfamiliar to them and for insiders to be aware of a phenomenon they would otherwise be inured to.” • Issues in Ethnology and Anthropology / Allegra

“[This book] continues and breaks with this tradition at the same time. On the one hand, relying on exquisite empirical material, she continues the finest anthropological tradition that focuses on the complex concept of favours, informality, and clientelism. By putting it in the context of the state welfare system, it presents how these shape social and power relations in a Bosnian town. On the other hand, with theoretical thoroughness, she rejects the Central and Eastern European specificity and the groundedness in post-communist transition, criticizes the orientalizing aspects of research in the topic, and formulates general conclusions on the challenges of the globally observable neoliberal transformation of the state.” • Acta Univ. Sapientiae

“Brković’s book is one of those that adds another piece to the puzzle that recent anthropological research on Bosnia-Herzegovina is creating… But here let me add that Managing Ambiguity is an essential piece to the puzzle since it deals with the topic not easy to research, to understand, and to present. My opinion is that Čarna Brković has done a great job and anyone who wants to understand this aspect of Bosnian society must read this book.” • Anthropology Notebooks 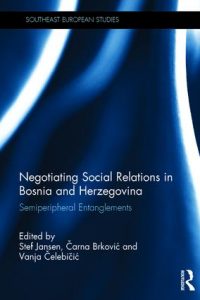 Contributions based on long-term, in-depth research projects explore how people in different parts of BiH make and remake social relations and outline how their practices of sociality relate to donor-set priorities and formal human rights provisions.

The book explores the socio-political concerns which have emerged within BiH, incites interdisciplinary conversations and sheds critical light on ways of engaging with these concerns and discusses forms of sociality, politics and agency which remain largely absent from the official political discourse and practice of local and foreign actors.

The commentaries of specialists who have studied BiH in different ways – sociologists, politicologists, historians – explicitly situate the contribution of ethnographic work in the country.