Montenegrin activists often claim that freedom is fundamentally shared, echoing the global activist idea that “No one is free unless we are all free”. The collaborative research project Shared Freedom poses two kinds of questions stemming from this claim.

First, it asks what this idea of freedom as shared can contribute to the anthropological thinking about freedom and morality.

Second, Shared Freedom looks at how trans people and activists in Montenegro can make use of anthropological thinking on freedom in order to advance their socio-political project of liberation.

Building upon the ideas presented in this talk and the 2021 SA/AS article “Minority sexualities, kinship and non-autological freedom in Montenegro”, Shared Freedom presents a collaborative ethnographic study of two instances of collective moral deliberation. One instance is grassroots queer activism where participants reach their decisions through collective deliberation and consensus. Another one takes place during the post-coming out period in the families of trans people, when their parents and siblings often turn to psychiatrists, fortune tellers, and others to seek interpretative frameworks that would help them orient themselves in a new and morally demanding situation.

Shared Freedom aims to offer an ethnographically grounded theorization of how freedom is understood, claimed, and pursued through collective moral deliberation among differently positioned people in everyday life.

In Shared Freedom, trans people produce knowledge about themselves by leading ethnographic diaries and generating visual representations of trans lives. Some results of our collaboration are presented on this website: www.shared-freedom.com

The aim of this project is to investigate the role of the digital in emergent redistributive imaginaries in Europe. Taxation, philanthropy, charity and mutual aid are redistributive forms which enable individuals to ‘pay in’ to their societies. In the contemporary conjuncture, digitization processes are rapidly reconfiguring access to and engagement with these redistributive mechanisms, initiating more social forms of payment and contribution. The emergence of new modes of contribution fostered by digital platforms point to novel forms of participation, solidarity and care for others, but they are also disruptive of established state-mandated forms of social provisioning. ‘Imaginaries’ are semiotic systems that give meaning and shape to lived experience. Redistributive imaginaries provide collective, common-sense ways of understanding the relationship between economic contribution and social solidarity: they give meaning to the structures which enable citizens to make prosocial contributions. This project will interrogate the role of the digital in emergent redistributive forms and imaginaries. By analysing five national contexts representing different welfare state models and philanthropic traditions (UK, Switzerland, Finland, Spain and Montenegro), it will consider the implications of this investigation for the future of prosocial contribution in Europe. As a consortium we are uniquely placed to deliver qualitative research that foregrounds the role of cultural, signifying practices in economic processes and practices and builds on our existing empirical and conceptual expertise. Our mixed-methods approach incorporates discourse analysis, affordance analysis of digital platforms, and ethnography of everyday prosocial practices. The investigation will significantly advance the study of economic imaginaries, and it will deliver evidence-based case studies and scenarios of value to a range of stakeholder audiences in civil society, government and business.

The project is funded by Collaboration of Humanities and Social Sciences in Europe (CHANSE), a joint initiative from the HERA and NORFACE networks, with co-funding from the European Union’s Horizon 2020 research and innovation programme.

Humanitarianism During and After Socialism in Montenegro, 2013-2023

This is an ongoing research of various humanitarian, philanthropic, and developmental actors in Montenegro. It aims to understand how people do – and do not – help others, through contextually specific humanitarian patterns, opportunities, and oppressions.

I have conducted ethnographic research at the Red Cross-managed camp for displaced persons on the outskirts of Podgorica. Commonly described as “the largest refugee camp in the Balkans”, the camp today provides housing for people who mostly identify as Roma and Balkan Egyptians, the majority of whom fled from violence in Kosovo in 1998 and 1999. I am also looking at the history of the Red Cross in Montenegro and at different philanthropic and vernacular forms of helping others that have been developed over the past twenty-five years.

Rethinking Politics of Favors in Contemporary Bosnia and Herzegovina, 2008-2016

This project started at the University of Manchester as my doctoral research on the ways in which people take care of one another through official and unofficial channels in contemporary Bosnia and Herzegovina. Over the years and with the support of the CEU IAS in Budapest and GSOSES in Regensburg, it resulted in the book “Managing Ambiguity” (Berghahn 2017).

In “Managing Ambiguity” and various articles, I explore how citizenship was redefined as an ethical category, showing that favors and clientelism offered people a way to navigate the resulting ambiguity over welfare responsibilities. This research also looked at how differences in power and socio-economic status were reflected in what people could do with ambiguity: while most people struggled to navigate ambiguity and to find their way through it, there were some who were able to manage it.

This research started in 2011, when I won the Wenner Gren grant to organize the conference Anthropology Otherwise, together with Andrew Hodges, Vanja Celebicic, and Marina Simic.

The discussions the thirty participants had led during this five-day event, held at the Petnica Science Centre, have given me an impetus to look more closely at the history of ethnography at the beginning of the twentieth century in Croatia and Serbia.

In 2014/15, with the generous support of the New Europe College Institute for Advanced Study (NEC IAS), I focused on the ethnological archives organized, collected, and published in the Balkans a century ago. The kinds of things noticed, written down, put on maps, and deemed worthy to be published by the early Balkan ethnographers point to a particular idea about the relationship between “natural” and “social” worlds, whereby a “society” could not be known without knowing “nature”, and vice versa. This research explores the ways in which focusing on “just data” (rather than on theory) allowed early Balkan scholars to leave “nature” and “society” epistemologically undistinguished. It looks into the wider conceptual framework in the Balkans in which “society” and “nature” belonged to the same order of knowledge: they were described and measured through the same terms (and thus prone to “anthropogeographic” or “cultural-genetic” approaches).

Ambivalence of Nation-Building in Montenegro, 2007-2009 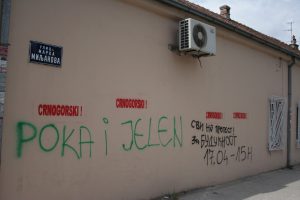 I worked as a junior researcher on the project New and Ambiguous Nation-Building Processes in South-Eastern Europe. It was organized by the Free University Berlin and University of Graz and funded by the Volkswagen Foundation and Austrian Science Fund.

As a pre-doctoral researcher exploring senses of national belonging in Montenegro, I conducted ethnographic field research in online communities and NGOs in Podgorica.